Many new challengers are joining the Tower Rodeo this year but a past contestant named William Henry is prepared to show the new competition what he has learned from last year’s event. William Henry was a marine for six years, spending 4 years as a scout for the first infantry and teaching infantry tactics at the marine officer school for 2 years. William has been in the tower industry for over 10 years working at Tri County Towers since 1985 as a young boy for his father’s company. 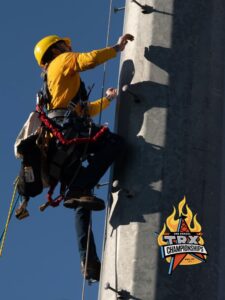 Last year, William joined the Tower Rodeo coming in second place but is planning to win first with his teammate Dylan Hartzell, who participated in the games last year as well. Williams’ favorite challenge was the semi finals relay race. By joining the Tower Rodeo, William learned his weak spots were mechanical advantages and knots and has since implemented both into his training. All in all, William and Dylan are excited to be a part of the Tower Rodeo Challenge again and we are too!